“For the LORD your God will bless you in all your harvest and in all the work of your hands, and your JOY will be complete." –Deuteronomy 16:15

Archive for the tag “Patience”

“God uses broken things. It takes broken soil to produce a crop, broken clouds to give rain, broken grain to give bread, broken bread to give strength. It is the broken alabaster box that gives forth perfume. It is Peter, weeping bitterly, who returns to greater power than ever.”

At first it began with a little blue smoke from under the hood of my Craftsman tractor. Ever since I’d let the oil drop to the bottom of the dip stick, that 21 horsepower Briggs & Stratton engine reminded me I’d messed up every time I mowed. As far as it was concerned, redemption from my mechanical neglect would be hard in coming, if at all.

But onward I pressed my huffing lawn mower, performing my duties as the man of the house, topping off the crankcase with at least a half quart of 10W-30 before mounting that mighty red steed for a turn around the yard. The blue pall seemed to thicken with each passing week, until riding the tractor was like sitting in the back seat of Cheech and Chong’s ‘64 Chevy Impala in Up in Smoke.

Then came the black smoke as I tackled the thicker grass (no pun intended). With the black smoke came a horrid knocking sound, like a jackhammer on reinforced concrete. Sometimes the engine would stall. The smell of burning oil stuck in my nose for the rest of the day, and more than once I wondered what the exhaust was doing to my brain, let alone my lungs.

Finally, while attempting to mow the swamp that used to be our back yard, the blade drive belt slipped off the mower deck pulley array and the blades quit spinning. Like the Old Man in A Christmas Story, I wove a tapestry of cuss words that to this day is still hanging over the pond behind our house. 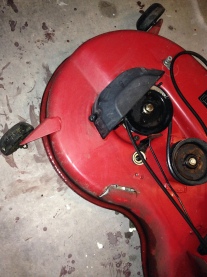 Meanwhile . . . a feisty storm had taken our five-burner gas grill for a spin across the patio and left it lying drunk and disheveled against our wood pile. After Mary and I managed to lift it up and drag it back onto the porch, I reassembled it then lit it to make sure it still worked. Flames rolled out of the control panel in front of burner number three, melting the control knob. I sighed and shook my head.

Meanwhile . . . I received a phone call from Mary while I was at work. “The stuff in the garage refrigerator’s freezer is thawing out. I don’t think it’s working anymore.” She transferred all of the meat from the 10-year-old fridge to the 32-year-old garage deep freeze. After I got home I measured the temperature and confirmed the refrigerator had gone kaput, like the tractor. Like the gas grill. Parts and labor to repair it would cost $428. I gritted my teeth until my fillings began to squeal from the compressive stresses.

The day before the tractor spewed its last puff of blue smoke (which, coincidentally was only a couple days after the garage fridge spewed its last breath of cold air, and a week after the gas grill spewed its last flame), my iPhone glitched, spasmed, rolled over, and died a wordless death, spewing years of photos, notes, messages, and contact information into the black hole of technospace. It was all I could do to keep from punching it right in the shimmering blue screen of death. 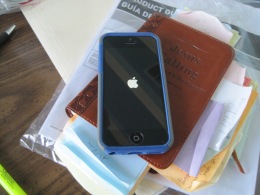 As I meticulously followed Apple’s step-by-step instructions on how to reset an iPhone using iTunes (hint: don’t even bother if the phone doesn’t turn on), I bumped a glass of wine off the computer desk where it smashed on the floor and painted the tile and the dining room wall a titillating shade of purple. iTunes failed to resurrect my decaying phone. 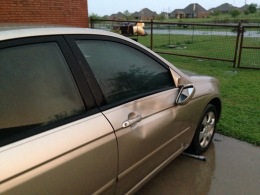 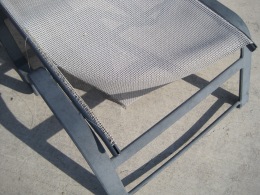 The next morning, after my sanity had returned from its sporty jaunt through the topiary gardens of hell, Mary pulled open the door of the microwave and the handle came off. I smiled. I chuckled. I began to laugh. Mary laughed with me. “All we need to fix all the broken things around here is $3000,” I half joked. In the spirit of James 1:2 and Philippians 4:6, we thanked God for our current season of trials, knowing that trials produce steadfastness and character, even though going through them sucks.

I went to work the following morning, and later that afternoon, as I was wrapping up, my boss unexpectedly handed me a check that more than covered the cost to fix all the broken things at home. “What’s this for?” I blurted, looking up at him.

“Another 180 hours to keep you around,” he replied.

“It couldn’t have come at a better time,” I whispered.

When I walked into the dining room, I showed Mary the check. “I told you Jesus would take care of it,” she said. Indeed He did. We prayed in thanks, right there on the spot, for the surprising (yet completely expected) provision God had laid in our hands. “Thanksgiving comes before the miracle,” we reminded Hannah when she asked me how much the check was for. We told her about Jesus giving thanks before breaking death’s grip and raising Lazarus from the tomb. We told her about Jesus giving thanks at the Last Supper before breaking the bread and offering His body to be broken as the sacrifice to manifest the ultimate Miracle. All that brokenness, all that thankfulness, all those miracles.

“Therefore humble yourselves under the mighty hand of God, that He may exalt you in due time,” Peter wrote in his first letter (1 Peter 5:6 NKJV). “Consider it pure joy, my brothers and sisters, whenever you face trials of many kinds, because you know that the testing of your faith produces perseverance,” James wrote to the twelve scattered tribes (James 1:2-3 NIV®). “Give thanks in all circumstances,” Paul wrote in his first letter to the Thessalonians (1 Thessalonians 5:18 NIV®). Give thanks in all circumstances, even when all hell has broken loose and broken everything. Then pull out the broom and the dustpan and get ready to sweep in the miracles. There’s no stopping them. 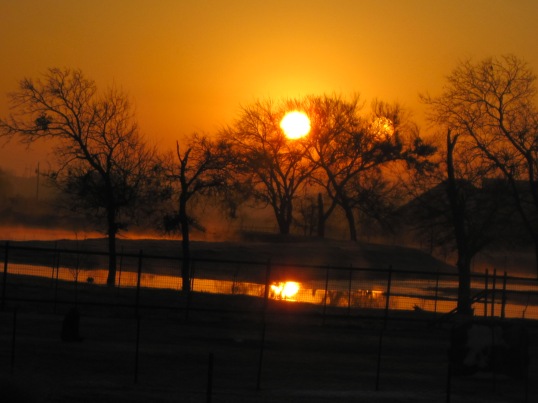 One of the most challenging aspects of leaving my full time job and stepping out in the obedience of my calling has been trusting God with my finances and maintaining fiscal patience. Despite the numbers on paper, I have a less-than-stellar investment record, marred by impatience and bruised by self-reliance. Recent financial squeezing combined with slow online book sales has been sporty, sometimes pushing me to question my judgment, other times instigating deep frustration when fears of losing my house try to assert themselves. As car repair bills made me consider buying a horse, medical invoices showed up weeks after the procedure had faded into history, mandated health insurance rates rose faster than my blood pressure, and my dog had an allergic reaction to her allergy serum, I feel my finances are experiencing the gruesome reality of death by a thousand cuts—a slow bleed out that could force my family into that spacious cardboard box I mentioned in a recent post. Sometimes I feel like Job—I can get just as whiny. And in these cases, like He did with Job, God’s got to get in my face to make me see the light.

As the recent financial challenges continued to mount, I realized I’d once again have to dip into my 401k to remain solvent. Although I’d committed to staying the course by sacrificing this monetary reservoir to finance our leap of faith, the thought of compromising my future by eating away at my life savings still leaves a slightly bitter taste in my mouth. Poverty thinking and dearth mentality aside, I was not happy with having to skim off more of my life’s savings, hence the continued impatience with the pace of book sales and the renewed contention with trust.

With these kinds of thoughts playing bumper cars in my head, I drove to the office one afternoon and focused on my work, immersing myself in the world of Coulomb, Faraday and Tesla. “I was wondering,” Chad asked out of the blue. “Would you mind if I paid you a half year salary up front? It would really help the business if I could do that.”

Whoa? Really? I thought. “Yeah, sure,” I replied, trying to remain poised and professional. “If that would help, I’ll just keep track of my hours and let you know when I burn it back down to zero.”

After the discussion, I texted Mary: Chad wants to pay me for a half year up front!!!!

Her reply: Omgoodness. What an amazing blessing. I’m crying.

“It was an interesting coincidence that Chad told you that today,” Mary told me after dinner. She explained that during the staff meeting at work, she had responded to the call for prayer requests. “I told the ladies, ‘This journey David and I have been on has been an amazing blessing, and we know God provides and He will provide, but we’re at a point now where we’re financially stretched. So please pray for peace during this and for God’s provision to reign. Now.’” My text, she said, had arrived soon after she’d requested that prayer. Another sign, another answered petition, another kiss on the cheek from a God Who cares for us more than we’ll ever know.

This summer James and Janet Marberry, neighbors, good friends and faith-filled believers, spent several weeks in Colorado. As we baked in the Texas heat, they played in the mushy snow. While out shopping one day, Janet found a framed photograph of a diorama depicting two miniature painters painting a river-polished stone. “Things Take Time” they had scrawled on the rock. Janet presented the picture to Mary and me, a gift for watching their house while they were out of town. “I thought of you when I saw this,” she said, “because this process takes time.” Coincidentally, the day she gave us that photograph was the same day the proofs of The Epiphany of Joy and Melted Clowns arrived in the mail, and the same day Mary celebrated the end of her formal job to focus on working the business end of the writing endeavor.

Just the other day a friend asked me how the book sales were doing. “Direct sales are going great,” I replied. “But online sales are painfully slow.” In fact, for every book I’ve sold online, I’ve sold eight or nine books at book signings, craft fairs and get-togethers with friends. “Marketing is hard,” I lamented. “But I’m learning.”

“Sometimes it may take years for a writer to take off,” my friend counseled, a fact that, alas, is true in most cases. But moving forward with deliberation and patience will make the moment of takeoff that much more thrilling. And more meaningful.

God does nothing with impatience. He kept His mouth shut from Chapter 3 through Chapter 37 in the Book of Job, allowing Job to wallow in self-righteousness, self-pity and indignation while his friends bore false witness against him. It can take ten years for a pecan tree to yield its first fruits. It took 4,000 years for God to restore mankind back to Himself after the Fall. It took millennia for Him to paint the Grand Canyon in all its splendor and breathlessness. God’s not in any hurry.

Things take time. Wait upon the Lord. Be still.

It’s all in His timing. And in His magnificent hands.

Like Loading...
Posted in Daily and tagged Answering God's call, Impatience, Inspirational, Job, Leap of Faith, Obedience, Patience, Religion and Spirituality, Self-righteousness, Staying the course, Stepping out in faith, The book of Job, Trust, Trust in God | Leave a comment